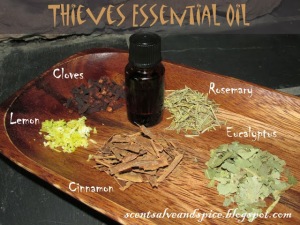 Even the healthiest of diets sometimes are not enough defense against severe viral cold infections that tend to spring up during the winter and fall months. In some cases nutrition and diet is enough, depending on someone’s stress level, the amount of exercise they partake in and the amount of the cold virus that they are exposed to on a regular basis; but most of the time it is a question of someone’s immunity. With this said usually people tend to experience the biggest brunt of cold viruses during the winter season. If you are like many who have opted out of taking the flu shot for cold protection, nutrition is one of many options that you have to fight off the cold, but you have other options for protection as well, you have Aromatherapy options that are very strong and vigilant against fighting cold viruses.

Thieves Oil or what is commonly called: “Oil of the Four Thieves” is a very powerful essential oil blend of black cloves, lemon essence, cinnamon bark, rosemary and eucalyptus. The name of this oil is derived from the historical story of 4 grave robbers who were living during the time of the Plague in France in the 15 Century. They comprised this powerful blend of herbs and applied it to the soles of their feet, chest and arms as protection against sickness, the plague and cold viruses as well as any deadly spores that they may have come in contact with while they conducted their morbid business of robbing graves for profit during an era of mass hysteria in Europe. Word began to spread about this powerful aromatheraputic blend and the rest is literally history: people have been using Four Thieves Oil as a viral defense against colds and sickness ever since and for good reason. 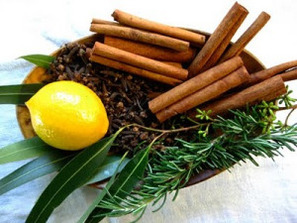 I have been using Four Thieves Oil in my practice and for personal health and the effects are tried and true. While historical stories make for good conversation, it is also good to know some of the documented scientific benefits of this oil can do for you in a natural and safe way without harmful internal chemicals.

Headaches: Four Thieves Oil can be placed on the roof of your inner mouth for headache relief. Please be mindful of the amount you use due to the heating sensations that cinnamon can cause. Repeated uses may be necessary.

Poison Ivy and Insect Bites: A strong anti-septic, Four Thieves Oil can be used directly on this skin. Combine one drop of oil with lavender per ounce of water in a bottle and spray on the affected area.

Immune Support: Apply Four Thieves Oil undiluted directly to the bottom of the soles of your feet for quick absorption into your blood stream. This is a very effective form of preventive Holistic treatment to boost your immune system. This makes an ideal oil to use for teachers, people who work in closed ventilated spaces and people who are prone to catch colds often.

Bronchitis, Cold and Flu: Place 15 to 20 drops of Four Thieves Oil and then mix with olive oil. Then apply to lower back and the upper portion of the thighs to flush out the illness. For upper body problems like the flu and bronchitis apply vigorously to the back of the neck and then apply directly to the chest, the throat up to the lower jawbone and finally to the soles of your feet.

The effects of  the treatments will vary of course from person to person, yet the overall agreed upon feeling is that Four Thieves Oil if used often does carry benefits for the ailing person in some form or another. Combining this with healthy alkaline eating and keeping acidity low in the body makes for a powerful agent against fighting off illness and cold viruses in general. If you have grown tired of using conventional methods to fight off colds and you haven’t seen many results from it, consider a natural method as an experiment to see if does help. You just may be surprised with the results. With love and health to you and your families.

One thought on “Cold Protection in the Winter with Four Thieves Oil.”